Since it came into existence in 1906 Chestermere Lake has always been a place for fishing!  This photo from Glenbow Archives shows a fishing party from the early 1900s.  Read below for more fishy stories. 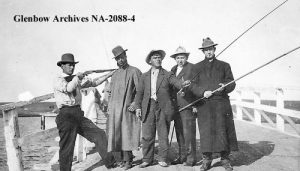 Fishing Party at Chestermere Lake…now what was the gun for?

12 year old Emil Spielman,of Calgary catches 22 lb pike in 1932 at Chestermere Lake. This fish is on display at City Hall.

This fish is a pike.  According to Trevor Rhodes, Head, Fisheries Management, Southeast  Region, “…water wolf, slough shark, snake, hammer handle, northern, jack, jackfish and gator are all names used to describe the most prominent sportfish in Chestermere Lake. Officially known as the Northern Pike, it is a voracious predator of small fish and freashwater shrimp and provides the basis for the excellent recreational fishery in Chestermere Lake. “

An article in the Calgary Albertan recorded Emil’s fish as a record for the Lake at that time.  (see photo). The pike was stuffed and resided in the basement recreation room in the home of  Dennis Spielman of Calgary, son of Emil Spielman.   This fish was donated to the town of Chestermere in 2004, and resided in the Chestermere Public Library (and true to its nature frightened just a few children!) until it was placed in its new home upstairs in the Town of Chestermere Offices in 2009. 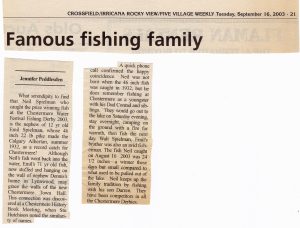 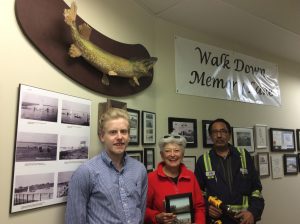 The Story of Roseanne Jackson and her Huge Pike 1964

One of the errata for the 2005 history books is the omission of the story that goes with the picture on page 192.  Unfortunately the story of the OTHER big fish caught in Chestermere, and which was stuffed and is hanging in the City of Chestermere Municipal Building unfortunately got missed.  Here it is, so you can hear what happened the fateful day she put her rod into the water.

In June of 1964, Roseanne Jackson of Calgary landed one of the largest fish ever caught in Chestermere Lake.  It was by chance that Roseanne was fishing that day.  She and husband Harvey were visiting Doris and Bob Kane ( West side of the Lake) who had just bought a new motorboat.  After the first spin around the lake, the four decided to try a bit of fishing.  Roseanne’s rod was baited first and while the rest of them were still attaching worms, Roseanne was shouting, “I’ve got a fish!”   Nearly 100 feet of line was quickly run out from Roseanne’s salmon rod.  After an hour of manoeuvring through the weeds, the big pike was finally near the boat.  They had to use a hand net at each end to haul it in.  This all took place about 200 yards off shore from Orley and Mildred Brinker’s cabin.  Excited about how much the pike might weigh, they took it to the Chestermere store for a check.  It was 23 1/2 pounds.  Such a prize is worth keeping, so they immediately had it mounted by a taxidermist by the name of Erickson. Unlike the techniques used today, he used the whole fish, not just the skin over a foam core.  Nearly two years later, 1966, Roseanne was pleased to receive a trophy from Sick’s Brewery Ltd Lethbridge, recognizing her feat.  The problem was, the trophy said 23 lbs, yet the fish was really 23 ½.

On July 20th, 2009 at 5:30pm Roseanne and Harvey presented this fish and trophy to the Town of Chestermere for the historical display in the Library.  It hangs there today, along with the framed trophy which Roseanne also donated to the Historical Foundation. 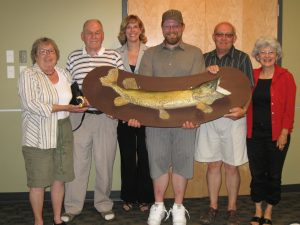 An Even Bigger Fish Story

February 20 2018 – Thanks to Dave Ladner for digging this story out of his files.

From “The Calgary Herald, Heading Out This Weekend column Friday Aug 14 1992.  Chestermere Lake ( east of Calgary): Could be a hot spot this weekend.  Wednesday, a 13-pound Lake Whitefish was brought into a Calgary fishing store.  Unfortunately the angler had run over the fish with his boat and scooped it out of the water.  Had he caught the fish it would have been a world record.  The current world record is 14 pounds, six ounces. (The Chestermere fish had been cleaned before it was weighed.) The current Alberta Record is just over 10 pounds. Try wire worms or maggots or both.”

There was a follow up printed in The Calgary Herald Saturday September 5th 1992 ” MYSTERY SOLVED  The mystery of the Chestermere Lake Monster has been solved–sort of.  Our Heading Out fishing report a few weeks ago told about a 13-pound lake whitefish brought into a local sporting goods store.  It sparked considerable interest since the world record is just more than 14 pounds, the Alberta record just over 11.  The fish had been cleaned, the head removed.  Chestermere resident Jfff Badyk read the report and chuckled.  A few days earlier, he and his son Jeffrey, were fishing in their boat when they heard a thud.  Shutting down the outboard, they found a huge injured whitefish–silver-scaled flank slashed by the prop–floating in the boat’s wake.  They cleaned the fish and tried to give it away to neighbors.  When all refused the offer, Badyk threw the headless whitefish in the lake for the seagulls. That’s when it must have been picked up by other anglers who bought it to Calgary.  Doug Lowe, Fisheries biologist with Alberta Fish and Wildlife, says he didn’t know Chestermere held any whitefish. He suspects the monster was so big because it had non-functioning sex organs, meaning all its energy was used for growing rather than reproducing.”

Another ‘Fishy’ Story about Chestermere Lake

At one of the recent Chestermere Historical Foundation programs, a long time resident on East Chestermere Drive commented that the lake had been stocked by her neighbour with Walleye years ago.  It turns out that that neighbour was Roland Paquette, who worked at the Sam Livingston Fish Hatchery in Calgary 1440 – 17 A Street SE.  Roland was father to Wayne Paquette former fire chief for the Volunteer Fire Department of the Summer Village of Chestermere, and grandfather of Brent Paquette, who presently works at the Chestermere Fire Department.

Of course, as the title belies, it is just another fishy story!  According to Wayne, ” It was one of those things Grandad said he always wanted to do but he couldn’t get the OK to do it. The story got around that he did it but it never happened there are a few Walleye in the Bow river and that is where the lake is filled from so there is the odd one here and that is why the story was believed to be true but it is not…he did not, I repeat he did not, put [fish] into the lake.  He always wanted to put some Walleye newly hatched in which was highly illegal. So it never ended up happening.”

There is much more about the fish that inhabit Chestermere Lake in the pages of ‘Chestermere A Home for All Seasons’. There are still a few copies of this history book available, contact us for information or buy one through our webpage.