Thanks to the Hansen family for being curious about the Chestermere business started by Paul Hansen back in the 50s.  Their stories and interest brought CHF this delightful historical documentation  of a family business.

At that time, Chestermere seemed like a great place to build a business.  A business/commercial park was planned for the area on which we now see Chestermere Public Works, just east of the Highway #1 traffic round-about at the east end of, and north of, Chestermere Boulevard.  ( some of you remember that this was the location of the water slide) Of the businesses planned the only one which actually materialized was the Lakeshore Drive In.  It was built by Paul Hansen, who had experience in the theatre business, as he owned at that time Crescent Theatre in Calgary.  This is the story that was told to Chestermere Historical Foundation by Gayle Hansen, Paul’s daughter, with added pieces by Janet Hansen, wife of Keith Hansen who is Gayle’s brother.

“ The Chestermere Drive In ( as Gayle called it) was a very family-oriented business set up in 1952 by Keith’s step father Paul Hansen, who was a Calgary realtor/business man.  Paul owned the Crescent Theatre at the corner of 16 Ave and Centre Street NE at the time and was a Lion’s Club President.

During weekends, Keith and his brother, Trevor, worked on the grounds collecting trays and trash and generally cleaning up after shows and helping their Dad.

Gayle, recalls being out at the site during construction of the Drive In.  She was 9 years old and she helped her mother in the concession booth, selling hot dogs and pop before the shows.

Because she was small, her Dad built a step stool for her so that she would be high enough to serve the customers.

She says that Paul did some ‘silly’ things, to attract customers.  Because they were so far out of the City ( Calgary) at the time.  They had a ferris Wheel set up one season.  Keith has thought this to be the same big one set up at Heritage Park [ would need some research] he often told the story of getting held up at the top of the contraption in the dark with Trevor at the controls; Trevor taking his own good time to letting him come down.

One time Paul invited a group of well-known wrestlers to hold a match to attract visitors before the show started.

He also held Bingo games before show time.  Gayle remembers one night some animals were given as prizes to those who wanted them.  One night a little kitten was left over and she became Gayle’s kitty, who she named Bingo.

Keith’s wife Janet, at the time a student just having finished her second year of university, worked weekend evenings that summer at the gate selling tickets.  She recalls that they all had a lot of fun together. “

The family said that the drive in only operated from 1952 to 1957.  It seems that television came to Calgary, and the enticement to go to a drive in waned.  However, the site was taken over in the 90s and a water slide built on the property by another owner.

Thank you to Gayle for the photos of the kiosk at the entrance, the snack bar and the raising of the screen when the drive in was first built.

The colour photos are of the snack bar /projection building after the drive in closed, and before it was burned as practice for the volunteer fire department, photo thanks to Kathy, and an aerial photo by Keith Turner of what was the remains of the water slide in 2005, now a camp ground.

In the spring of 2019 Paul visited with CHF members at the Chestermere Library and was interviewed by Emily Rogers of The Chestermere Anchor.  Here is the subsequent article published in the summer of 2019. 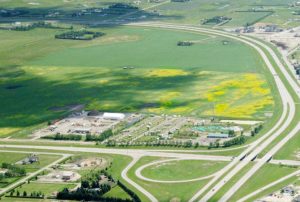 Drive in was located where one can see the blue water slides from 1994 – aerial photo by Keith Turner. 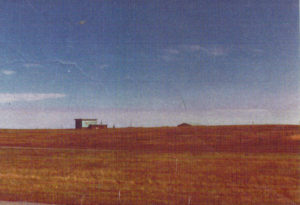 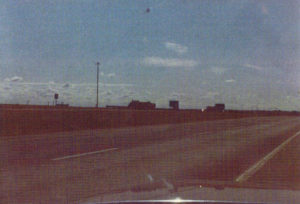 Looking to SE from Hwy #1 – photo Kathy Hayes no date 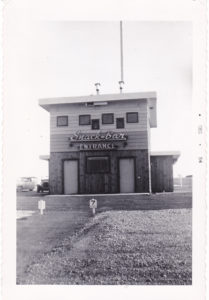 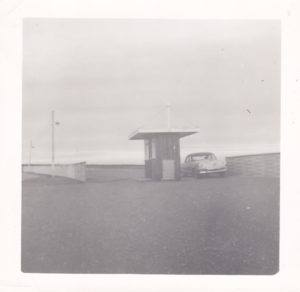 Entrance kiosk for Lakeshore Drive In 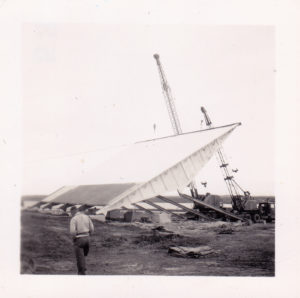 Raising the screen 1952 Lakeshore Drive In